This is a very relaxed piece. Or not, depends on how you view it. The idea here is to have some kind of (nearly) “irregular”, “organic” processes controlling timbre, rhythm and – partly – pitch and some transitions between pitch, timbre and rhythm (which are basically the same thing – changes in time).

A first voice (panned somewhat on the left side) is built from two A-111 VCOs (pulse wave out used, 2 octaves apart), mixed and sent into an A-101-1 Vactrol VCF (only lowpass input used here). Then I go into an A-188-1X BBD, coupled with an A-108 VCF (48 dB to filter out the BBDs internal clock noise). VCA is an A-131, since it adds some nice distortion (together with the A-108). VCO pulse widths are modulated by two independent LFOs (tri and saw waves from an A-143-3 Quad LFO). The Vactrol VCF is modulated by another LFO (tri) from said A-143-3 and by an A-147 Voltage Controlled LFO (saw out). The BBD is modulated by the same VC LFO (sine out), and of course manually (this is a serious instrument by itself). The VCA is only modulated by the sine wave out of the A-111 tuned 2 octaves down.

The second voice (panned more on the right side) is based on three A-110 VCOs: 1 VCO with sawtooth wave put into an A-137-2 Wave Multiplier II (modulated by all four sine/cosine outputs of an A-143-9 Quadrature LFO), the other two VCOs 2 octaves down (somewhat similar to the first voice) with sine waves out. The mix is put into an A-124 Wasp VCF with level craked up to get some (different kind of) distortion here, too. LP/HP out of the filter is sent into another A-131 VCA. The VCA is not modulated.

Some noise – to blur things, to make structures a little bit more opaque. Colored noise from an A-118 is sent into an A-127 Triple Resonance Filter and then into an A-134-1 VC Panner, modulated by an A-146 Variable Waveform LFO (triangle out, more like a rising sawtooth).

Finally, there’s a sequence line: another three A-110 VCOs (two pulse waves and one sine – 1 octave down) are sent into two A-106-1 Xtreme filters (first one configured as highpass, second one as lowpass). Then we go into an A-132-3 VCA. VCOs are controlled by said A-155/A-154 Sequencer, which can also control the first and second voice mentioned above (manually switched via A-185-2 modules). Both VCFs and VCA are modulated by an A-142 Voltage Controlled Decay – triggered by the sequencer and decay modulated by the A-143-3 triangle LFO (mentioned above, the one being sent through an attenuator, inverted here by an A-175 Voltage Inverter). The two VCOs producing pulse waves are PW modulated by an A-143-9 Quadrature LFO (sine and cosine). 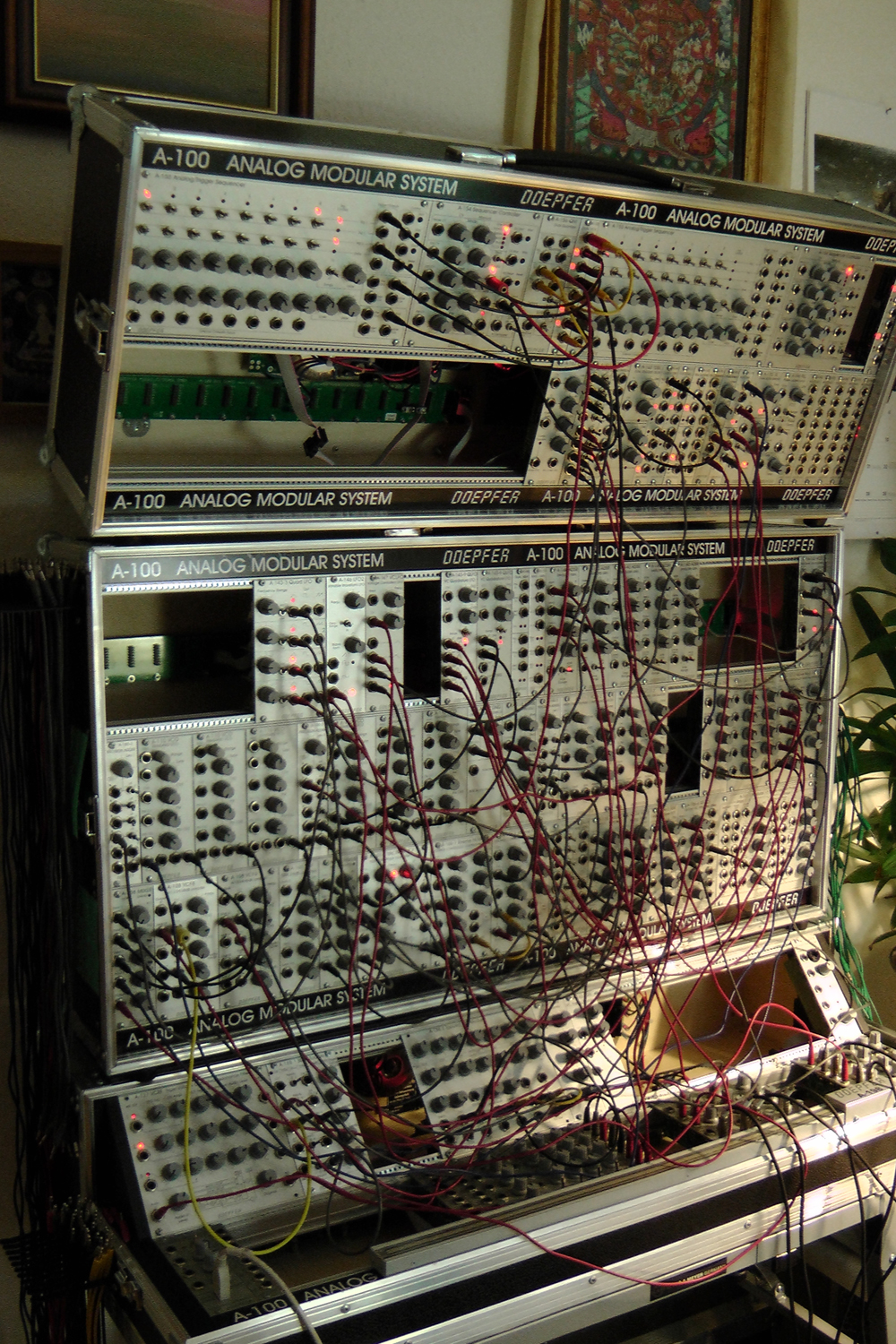