A simple sequence with 6 steps (most of the time). Every step has its own sound source. Near the end (starting at 14:25), tempo is varied up to audio frequency of the sequencer and back.

No overdubs, just an A-100 recorded in Ableton Live and mastered with Steinberg Cubase.

The six voices are constructed as follows:

1. Three A-110 CVOs (all with sawtooth out used) are mixed and sent into an A-108 ladder VCF, the 24 dB lowpass filter out is then sent into an A-188-1 BBD and then into an A-131 VCA. VCOs are controlled by an A-155 Sequencer with A-154 Sequencer Controller. VCF cutoff frequency and VCA are modulated by an A-140 ADSR, triggered by the first sequencer step (this is done via A-160 Clock Divider / A-161 Clock Sequencer) or alternatively (with switched multiples A-182-1) triggered by all sequencer triggers (trig1 out). The BBD is modulated by a slow A-143-3 triangle LFO and by an A-143-1 Complex Envelope Generator (mix out used). As an alternative to the VCOs, it is possible to crossfade to colored noise from an A-118 Noise Generator. Crossfading is done manually with an A-134-2 VC Crossfader and an A-198 Ribbon Controller.

2. Another three A-110 VCOs are used for the second voice. First and second are used directly (pulse waves), the second and third VCO (sine wave outs) are combined with an A-114 Ring Modulator and then mixed with the direct VCO outputs. The result is sent into an A-106-1 Xtreme Filter (only lowpass used) and then into an A-127 Triple Resonance Filter and an A-131 VCA. VCOs are controlled by the same sequencer as the first voice. A-106-1 VCF and VCA are modulated by an A-140 ADSR, triggered by the second step of the sequencer (also done via the A-160 Clock Divider / A-161 Clock Sequencer mentioned above).

3. Digital noise from an A-117 Digital Noise Generator is sent into an A-106-6 Xpander VCF and then into an A-132-3 VCA. VCF and VCA are modulated by an A-140 ADSR, triggered by a trigger derived from the rising and falling edge of the third sequencer step (viaA-160/161 and am A-165 Trigger Modifier). Alternatively to the noise signal, the square wave output of the first A-110 VCO mentioned in the first voice can be used. Switching is controlled by sequencer gate output and an A-150 VC Switch.

4. The triangle out of an A-111 VCO is sent into an A-137-1 Wave Multiplier I and then into an A-105 SSM VCF. The VCO is controlled by the same sequencer as all others, the Wave Multiplier is modulated by four sine waves from an A-143-9 VC Quadrature LFO. VCF cutoff frequency and VCA are modulated by an A-140 ADSR triggered by the fourth step of the sequencer (and via A-186-1 by the seventh one, if sequence length is adjusted to 7 or 8 steps).

6. White noise from an A-118 Noise Generator (or alternatively the pulse wave out of the first A-111 – switching done in a similar way as voice number 3) is sent into an A-132-1 VCA and then into an A-188-2 Tapped BBD and an A-124 Wasp VCF and an A-132-3 VCA. Both VCAs and the VCF are modulated by an A-142 VC Decy Generator triggered by the sixth step of the sequencer. BBD frequency is modulated by the sequencer that controlls all VCOs.

Additional things: in order to control many VCOs and the BBD by the same sequencer output, three A-185-2 Precision Adders were used (also fine for quick switching of octaves). In order to get „harmonic“ pitches, an A-156 Quantizer is used. Sequencer clock is triggered by an A-146 LFO which is somewhat smoother in transition to audio frequencies (which is more abrupt with the A-154). First and last sequence step are changed manually. The first sequencer step triggers another A-155/A-154 combination. This second sequencer modulates the transpose input of the quantizer. 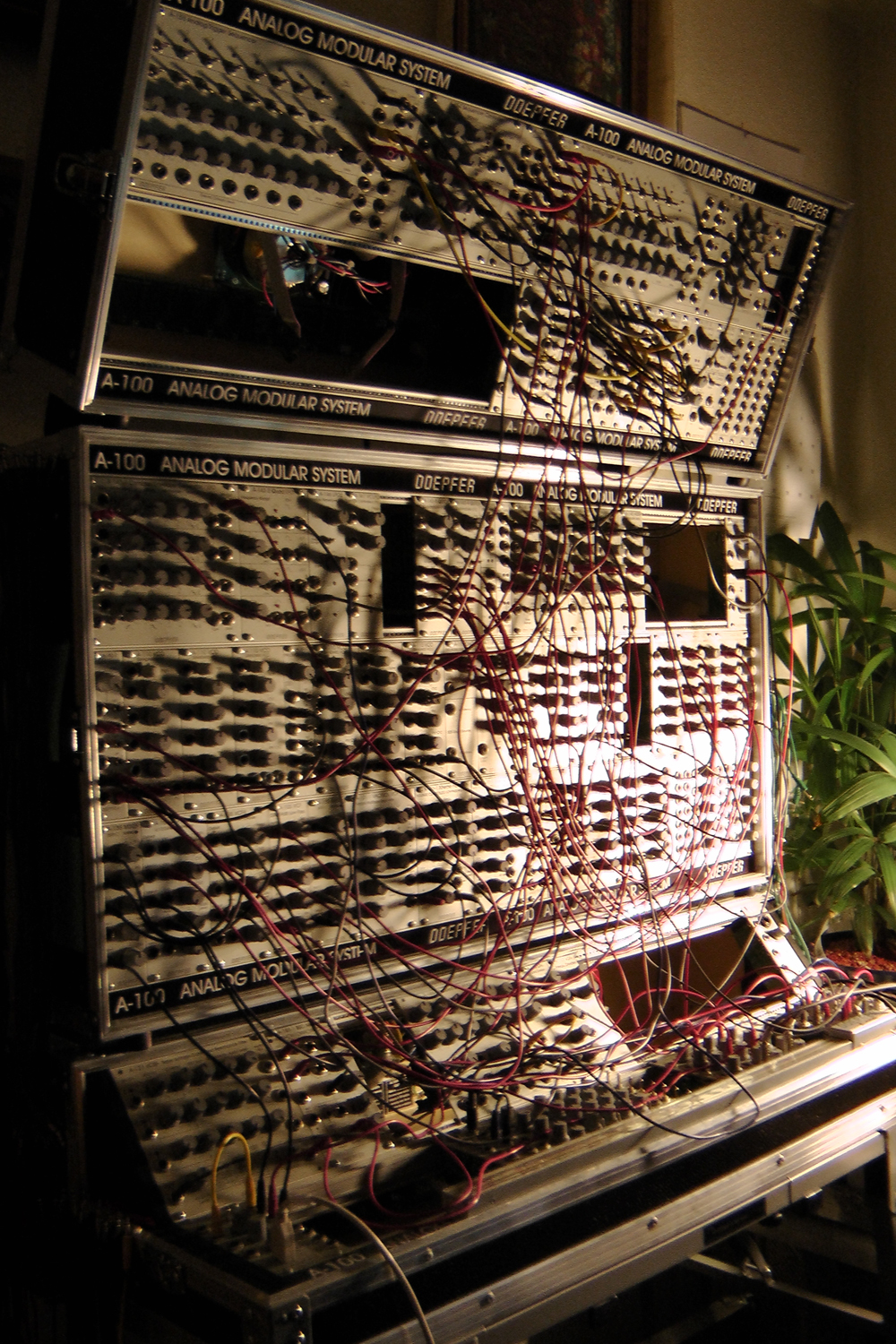 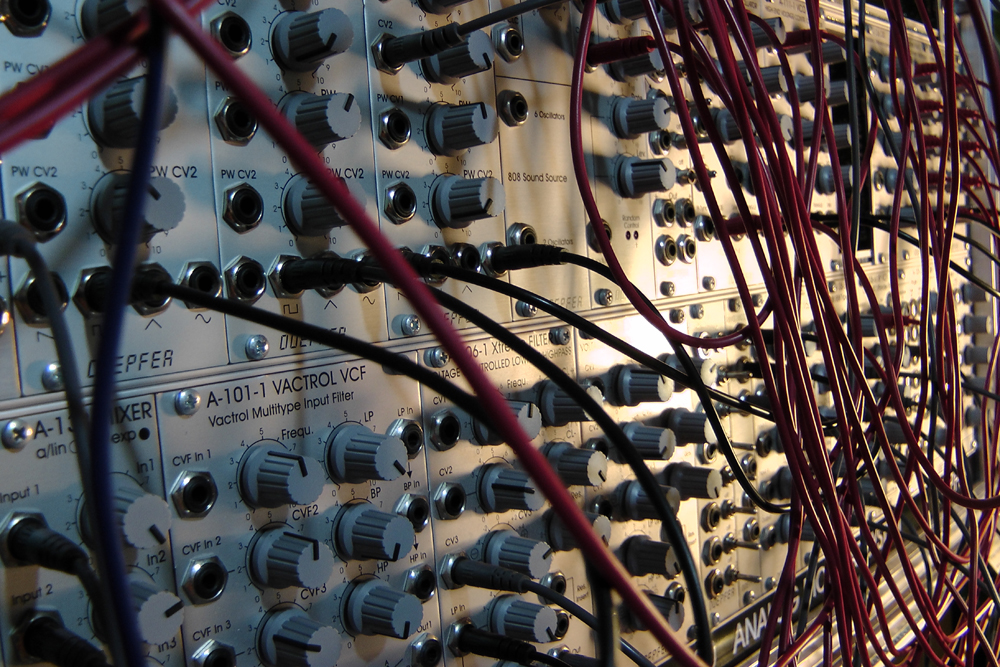