This is about interdependency and randomness.

Track length is 20:27. Everything was created with an A-100, recorded without overdubs in Ableton Live and mastered in Steinberg Cubase.

1. This is the most complicated voice, since it consists of four sub-voices which were switched via A-151 Sequential Switch:

1.a Three A-110 VCOs (triangle and two pulse waves) are mixed together with a suboscillator (A-115) derived from the first VCO’s pule wave. Then we go into an A-101-1 Vactrol VCF and into the A-151 Sequential Switch. The VCO frequencies are modulated by an A-155 Sequencer / A-154 Sequencer Controller / A-156 Quantizer (first VCO from a different row than the other two). Pulse widths of second and third VCO are modulated by two different triangle waves from an A-143-3 Quad LFO. The Vactrol VCF frequency is modulated by an A-143-1 Complex Envelope Generator (mix out) and by an A-140 ADSR. Filter Q is modulated by the A-143-1 as well (single outputs mixed in an A-138m Matrix Mixer).

1.b The signal created before is split up before the switch (with an A-182-1 Multiple) and sent into an A-136 Distortion/Waveshaper and then into an A-183-1 Attenuator. The result is sent into the A-151 Sequential Switch. The A-136 is modulated by two different triangle waves from an A-143-3 Quad LFO.

1.c The sine wave out of the first VCO mentioned above is sent into an A-137-2 Wave Multiplier II and then into the A-151 sequential Switch. The A-137-2 is modulated by the four outputs of an A-143-9 Quadrature LFO.

1.d Sine wave out of the first and third VCO are mixed and sent directly into the A-151.

At the very heart of this patch is the A-143-1 Complex Envelope Generator: it is used as a modulation source for several elements as well as a trigger source for its rhythmic development. One of the comparator’s trigger outs controls the sequencer as a “main clock”, another one directly triggers the second voice (ADSR gate in).  Of course, both triggers are interdependent, because they reset each other’s LFO.

The first voice is triggered by a trigger row of the A-155 (manually switched during this piece). The third voice is triggered by a “randomized” derivative of the main clock (+/- out of an A-165 Trigger Modifier sent into an A-118 Digital Noise Generator as external clock – the resulting random clock out is used here). The fourth uses another derivative of the main clock: the above mentioned “+/-” out is sent into an A-162 Trigger Delay and then into a second trigger modifier – again, the “+/-” out is used (this allows for rhythmic variations by means of different length adjustments in the A-162).

Other derivatives of the main clock are used to reset the A-147 VC LFO (/32 division from an A-160 Clock Divider) and to switch to the next sub-voice input of the first voice (/64 division). A second A-155 (triggered by every step “nr. 1” of the first one) transposes the sequence. 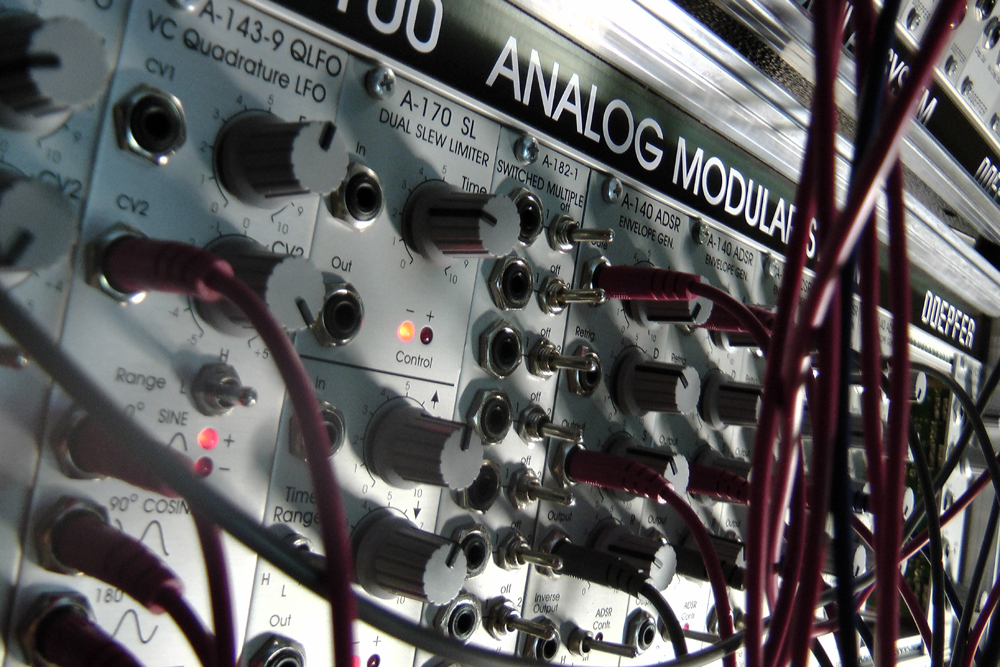