Again, this is quite a long piece. Thanks for your patience during listening!

As always, there are no overdubs, just an A-100, some effects in Ableton Live and Mastering in Steinberg Cubase. Everything was played in one take. We have two “percussion” voices and two melodic/sequended ones.

The second percussive voice (the slowe one) is digital noise from an A-117 Digital Noise Generator put into an A-136 Distortion/Waveshaper (this is quite some “heavy metal”, yes?) and then into an A-106-5 SEM Filter (which produces quite a beautiful sound). Both bandpass and lowpass/highpass outputs are then sent into the inputs of an A-101-3 Modular Vactrol Phaser. The two phaser parts are controlled by two independent LFOs (from an A-143-3). The two mix outputs of the phaser are sent into two VCAs of an A-132-3, which are controlled by the same A-140 ADSR. The A-140 is triggered by an A-142 VC Decay Generator which is triggered and controlled (decay time) by an A-155 Sequencer. The A-142 also controls the SEM Filter (so we have longer and shorter notes here).

Now there’s the “solo” voice: three A-110 VCOs (sine wave 1 oct down, two sawtooth waves) are sent into an A-138 Mixer and then into two A-106-1 Xtreme Filters (serial connection; one in highpass mode, the second one in lowpass mode). Then we go into an A-127 VC Resonance Filter and an A-131 VCA (controlled by an A-198 Ribbon Controller). The VCA output is split up (A-180 Multiples): partly sent directly into an A-138 Mixer, partly sent into an A-188-2 Tapped BBD. BBD Output is sent into an A-108 Ladder Filter (48 dB mode to cut the BBD oscilator noise) and then into the same A-138 Mixer. Frequency of the three VCOs as well as frequency of the BBD are controlled by the A-198 Ribbon Controller (put through an A-156 Quantizer and an A-170 Slew Limiter). The VCOs are also modulated by an A-143-1 Complex Envelope Generator (for some “human” vibrato, where necessary). The two A-106-1 VCFs are modulated by an A-147 VC LFO or by the A-155 Sequencer (which controls the slow percussive voice) via A-182-1 Switched Multiples. 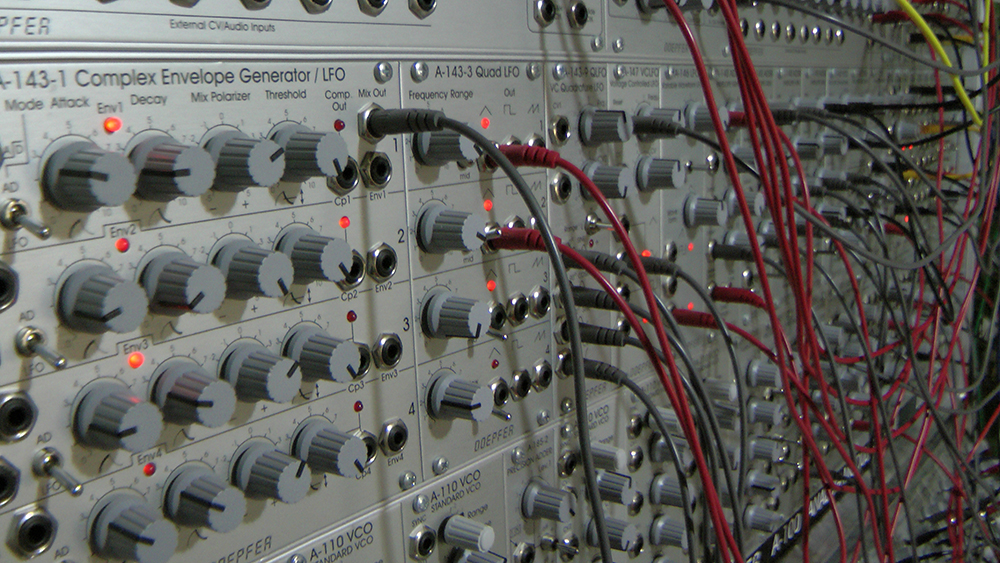 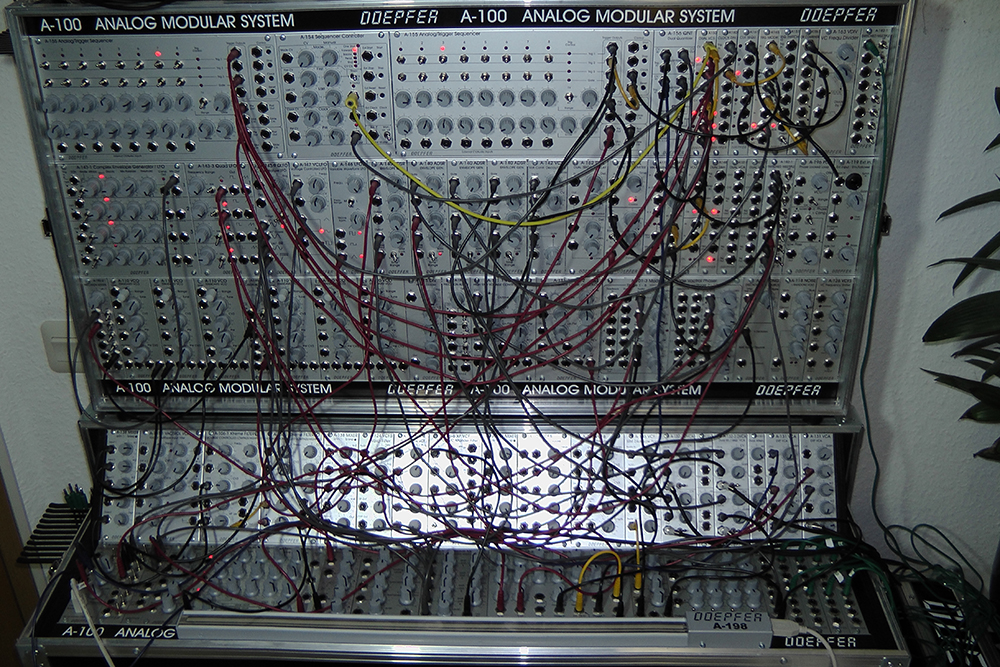