This is perhaps my most „slow motion“ piece as today. I’m using an AAS String Studio for some digitally messed up sweet melody (in the intro e.g.), the obligatory A-100 and an additional sequence done with NI FM8.

Drone voice 1: An A-111-5 Synthesizer Voice is sent through an A-112 Sampler (in effects mode, using reverse delay). The amount of the A-112 effect is controlled with an A-138e Crossfader. Then we go into an A-187-1 VC DSP (Chorus/Flanger/Echo mode) and the two DSP output channels are sent into an A-106-5 SEM filter (left channel) and an A-124 Wasp filter (right channel). You can hear that voice right after the into melody. There’s a lot of slow LFO modulation: both LFOs in the A-111-5 were used (for VCA and VCF modulation), the sampling frequency of the A-112 is modulated by a slow LFO, same with delay, feedback and rate of the A-187-1 module and cutoff frequencies of both filters (8 LFOs with slow triangle waves).

Percussive voice: The sound is derived from an A-149-1 Quantized Random Voltages module at audio frequency. The „n+1“ output is first sent into an A-199 Spring Reverb and then into an A-101-2 Lowpass Gate. The LPGs output is split up and sent partly into an A-115 Audio Divider and partly into an A-134-1 Panner (used as crossfader here). The other input of the crossfading A-134-1 is the Audio Divider’s output sent into an A-101-1 Vactrol VCF (LP input used), together with som noise from an A-117 Digital Noise Generator sent into an A-106-6 Xpander filter first and then into the BP input of the A-101-1. Modulation: the A-149-1 clock signal is an A-147 VC LFO rectangle. The VC LFO’s frequency is modulated by an A-155/A-154 Sequencer, which also modulates the „N“ of the Random Generator. The LPG’s frequency is modulated by an A-142 VC Decay which is triggered by the same A-155/A-154 Sequencer. The VCD’s decay length is modulated by one output of an A-149-2 Digital Random Voltages (being connected to the A-149-1). The LPG is switched between lowpass, lowpass/amp and amp with gate signals from the A-155/A-154 sequencer (gate output and one of the trigger outputs which is sent through an A-162 Trigger Delay to prolong the trigger a little bit). The cutoff frequency of the A-101-1 is modulated by the mix output of an A-143-1 Complex Envelope Generator (with all four sub-units in AD mode).

Bass voice: Quite a simple one. Three A-110 VCOs were sent through an A-138 Mixer, an A-102 Diode VCF and an A-131 VCA. The whole thing is doubled (with 2 connected A-185-2 Precision Adders), but with an A-105 SSM VCF. Both the outputs of these two sub-voices were panned hard left and hard right, respectively. Melody is done with a second A-155/A-154 Sequencer (synced with the first sequencer). Somewhere near the end of the piece, frequency modulation is done by athe „2 to the power of n“ output of the A-149-1 Random Generator. Filters and VCAs were modulated by two A-140 ADSR Generators.

The A-100 is synced to the DAW (running Ableton Live) via Kenton Pro-2000. The sync clock is sent into an A-113 to create some convenient rhythmic derivatives (for both sequencers). 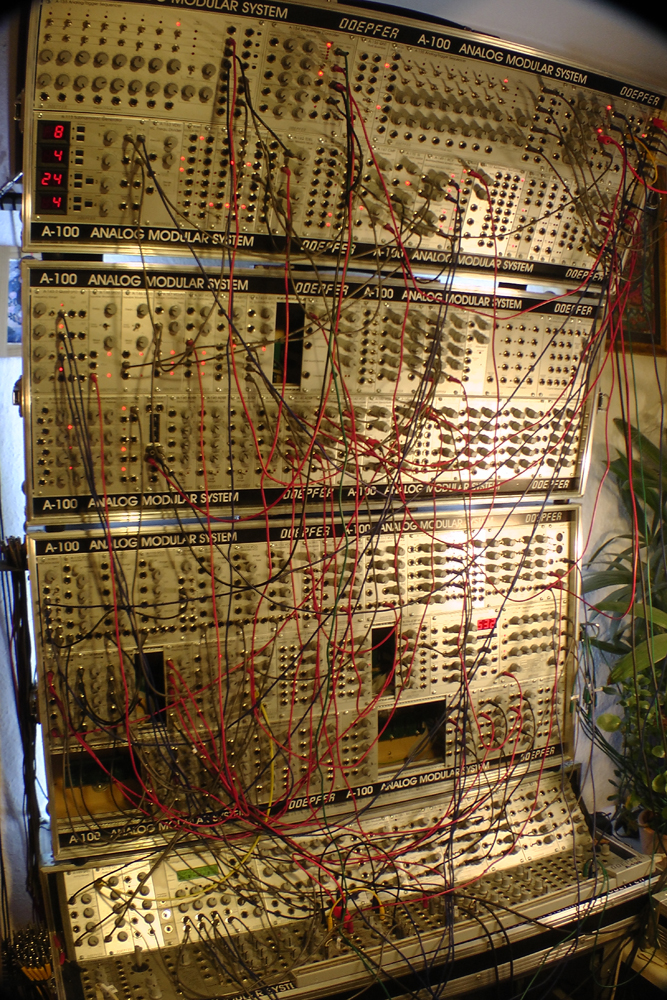